Yet another JSON library for C++. This one touts new C++11 features for developer-friendliness, an extremely slow-speed parser and no dependencies beyond a compliant compiler. If you love Doxygen, check out the documentation.

Features include (but are not necessarily limited to): 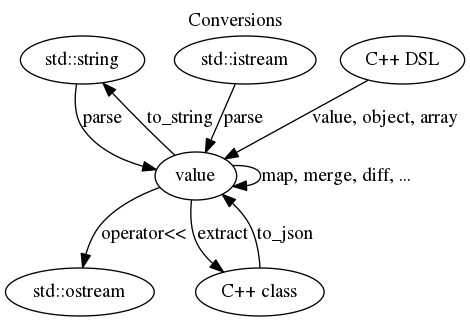 JSON Voorhees uses CMake as the automatic configuration software. On Linux or Mac OSX, if you have boost, cmake, g++ and make installed, simply:

If you want to customize your compilation or installation, see the options in CMakeLists.txt for easy-to-use configuration options.

If you are on Windows, you can also use CMake if you want. However, it is probably easier to use the provided Visual Studio project files in msvc/vs2015 to get going. Hitting F5 should perform a NuGet restore, then compile and run all the unit tests.

Future planned features can be found on the issue tracker.

Licensed under the Apache License, Version 2.0 (the "License"); you may not use this file except in compliance with the License. You may obtain a copy of the License at

The preceding statements are not true if the version is suffixed with -preN. These values are "pre-release" and are allowed to do whatever they feel like before a release.

When developing code, follow this simple workflow to determine which version components need to change:

This library assumes you really love UTF-8. When parsing JSON, this library happily assumes all sequences of bytes from C++ are UTF-8 encoded strings; it assumes you also want UTF-8 encoded strings when converting from JSON in C++ land; and it assumes the non-ASCII contents of a source string should be treated as UTF-8. If you wish to use some other encoding format for your std::string, there is no convenient way to do that beyond conversion at every use site. There is a proposal to potentially address this.

On output, the system takes the "safe" route of using the numeric encoding for dealing with non-ASCII std::strings. For example, the std::string for "Travis Göckel" ("Travis G\xc3\xb6ckel") will be encoded in JSON as "Travis G\u00f6ckel", despite the fact that the character 'ö' is the most basic of the Unicode Basic Multilingual Planes. This is generally considered the most compatible option, as (hopefully) every transport mechanism can gracefully transmit ASCII character sequences without molestation. The drawback to this route is a needlessly lengthened resultant encoding if all components of the pipeline gracefully deal with UTF-8. There is an outstanding issue to address this shortcoming.

What makes JSON Voorhees different from the other C++ JSON libraries?

JSON Voorhees was written for a C++ programmer who wants to be productive in this modern world. What does that mean? There are a ton of JSON libraries floating around touting how they are "modern" C++ and so on. But who really cares? JSON Voorhees puts the focus more on the resulting C++ than any "modern" feature set. This means the library does not skip on string encoding details like having full support for UTF-8. Are there "modern" features? Sure, but this library is not meant to be a gallery of them -- a good API should get out of your way and let you work.

Another thing JSON Voorhees does not attempt to do is be a lightweight library; in fact, it wants to be the kitchen sink for anything you want to do in JSON in your C++ application. This means it is configurable for your needs. That said, the library does not depend on strange environment settings, so you can still drop the .cpp and .hpp files into your own project if you want.

Why are integer and decimal distinct types?

The JSON specification only has a number type, whereas this library has kind::integer and kind::decimal. Behavior between the two types should be fairly consistent -- comparisons between two different kinds should behave as you would expect (assuming you expect things like value(1) == value(1.0) and value(2.0) < value(10)). If you wish for behavior more like JavaScript, feel free to only use as_decimal().

Why are NaN and INFINITY serialized as a null?

The JSON specification does not have support for non-finite floating-point numbers like NaN and infinity. This means the value defined with object({ { "nan", std::nan("") }, { "infinity", INFINITY } }) to get serialized as { "nan": null, "infinity": null }. While this seems to constitute a loss of information, not doing this would lead to the encoder outputting invalid JSON text, which is completely unacceptable (unfortunately, this is a very common mistake in JSON libraries). If you want to check that there will be no information loss when encoding, use the utility funciton validate.

Why not throw when encoding? One could imagine the encoder::encode throwing something like an encode_error instead of outputting null to the stream. However, that would make operator<< a potentially-throwing operation, which is extremely uncommon and would be very surprizing (imagine if you tried to log a value and it threw).

Why not throw when constructing the value? Instead of waiting for encoding time to do anything about the problem, the library could attack the issue at the source and throw an exception if someone says value(INFINITY). This was not chosen as the behavior, because non-finite values are only an issue in the string representation, which is not a problem if the value is never encoded. You are free to use this JSON library without parse and encode, so it should not prevent an action simply because someone might use encode.

Why are there so many corruption checks?

If you are looking through the implementation, you will find a ton of places where there are default cases in switch statements that should be impossible to hit without memory corruption. This is because it is unclear what should happen when the library detects something like an invalid kind. The library could assert, but that seems overbearing when there is a reasonable option to fall back to. Alternatively, the library could throw in these cases, but that leads to innocuous-looking operations like x == y being able to throw, which is somewhat disconcerning.

This is really helpful! Can I give you money?

With such a cool name, do you have an equally cool logo? 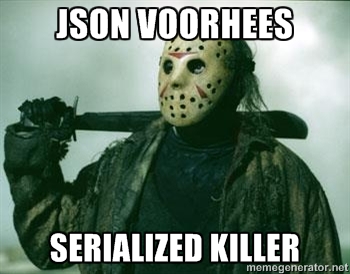 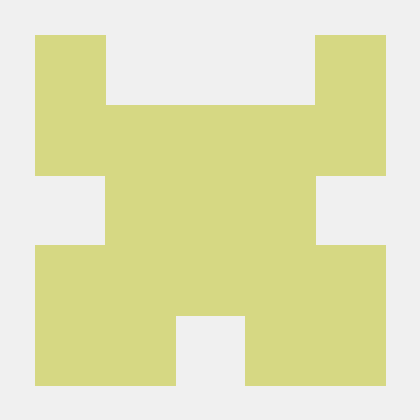