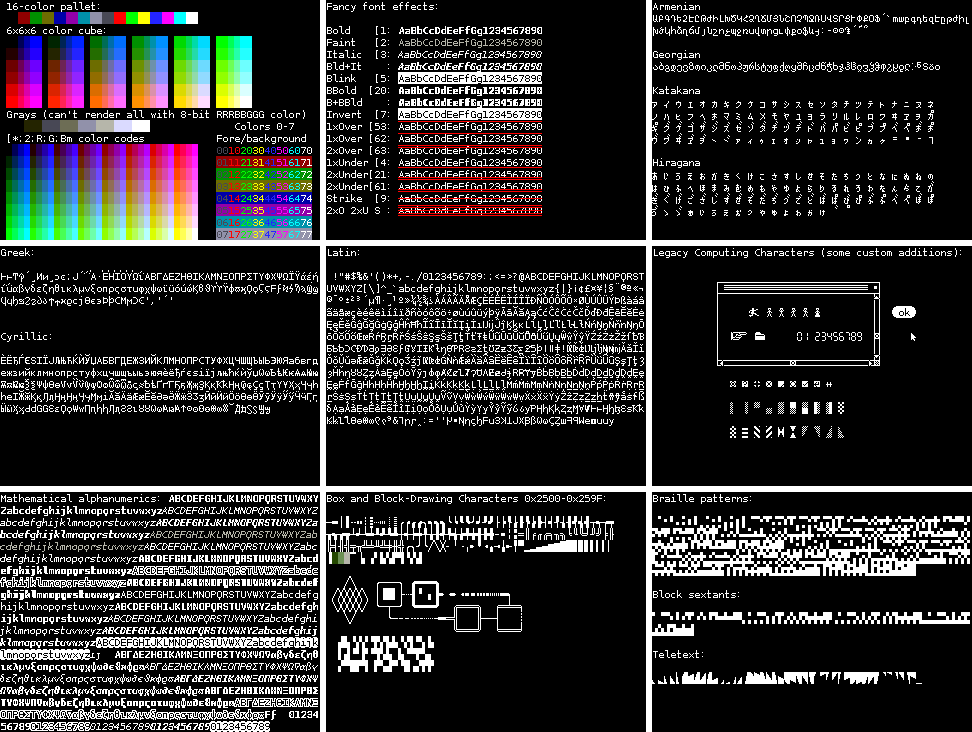 I've been playing with retro-styled interfaces terminal lately. The unicode box and block drawing characters are wonderful for this, especially "symbols for legacy computing". These include characters from classic computers of the twentieth century, and the block-diagonal teletext characters. These can be combined with ANSI escape codes for styled and colored text. Here's an example of a plot rendering in Gnome terminal using the teletext block-diagonal characters and ANSI color codes: How hard would it be to support these features on an Arduino terminal display? This question led me down a rabbit-hole of vt100 terminal emulators on the arduino.

Getting a basic Arduino terminal monitor is straigtforward, if building upon a graphics library that supports text rendering. Bodmer has a nice demo for the Arduino using the Adagruit GFX graphics libraries, and Philippe Lucidarme has a short-and-sweet demo for the Seeduino (video). Both of these use the ILI9341 touch-screen display, which is commonly available as an Arduino shield.

However, getting good performance with the Arduino is hard. Scrolling requires re-drawing large areas, and is slow. One work-around is to use the ILI9341's built-in vertical scrolling feature. Among the most feature-complete is Nick Matantsev's TinTTY VT100 emulator for Arduino+ILI9341. This includes fast vertical scrolling and a touchscreen keyboard. Nick cites as inspiration this VT100 emulator for the ILI9340 screen with Arduino, by Martin K. Schröder. Bodmer's vertical-scrolling terminal for Arduino+ILI9341 notes that performance can be improved further by optimizing the graphics drivers to write directly to the 8-bit PORTB/C/D registers on the Arduino Uno.

In the broader universe of DIY terminals, Fabrizio Di Vittorio has a full-featured graphics library for the ESP32, which includes an ANSI/VT terminal. James Moxham has explored Arduino terminals with a wide variety of LCD and LED displays. Scargill's tech blog has a VT-100-esque vertical terminal using a ILI9340 display for the ESP8266 (video). Matthew Sarnoff also has this beautiful VT100 implementation using an oscilliscope as a display. I was especially charmed by ht-deko's implementation of ANSI color and style codes for the STM32F103, which builds upon the work of cbm80amiga.

Can we get an Arduino terminal that supports enough semigraphics charactes? Let's implement a virtual terminal monitor for the Arduino Uno and the ILI9341 LCD display with the following objectives: 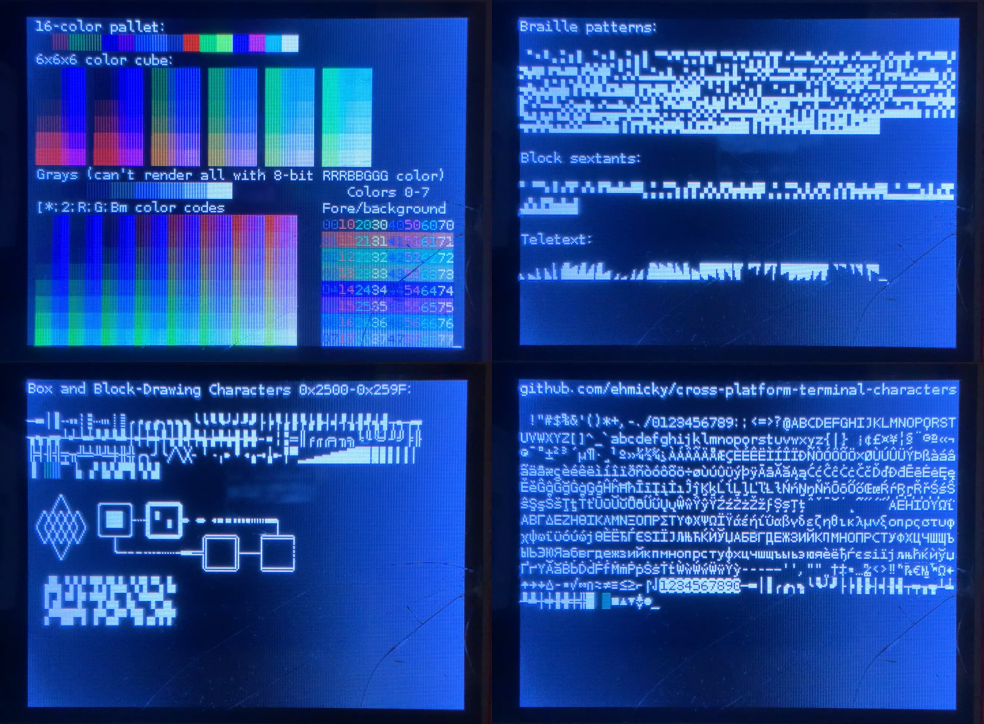 Version 0.2 includes some additional unicode characters, including Armenian, Georgian, and Katakana/Hiragana. There was an aborted, incomplete attempt to support devanagari (prefix diacritics would require a bit of extra code to handle). Supported unicode characters are given in v0.2/test_terminal/v0p2supported.txt 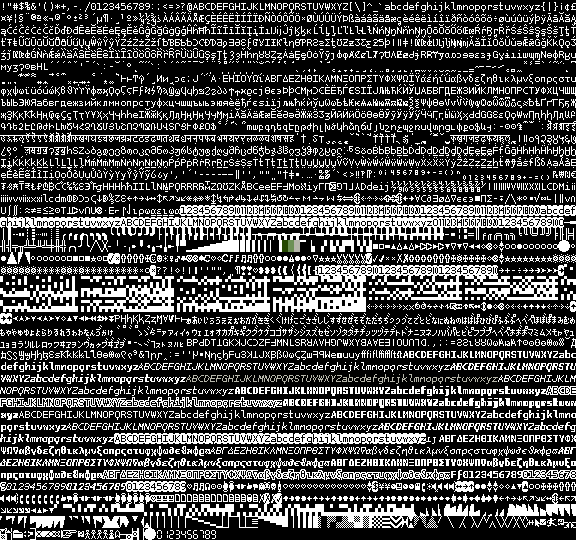 How to test it

Download the sketch and upload it onto the Arduino Uno with an Adafruit-style ILI9341 LCD shield.

(The flags cr3 ff1 nl1 bs1 will be explained later)

Copy the output of a command with unbuffer

Send keystrokes with screen or picocom

This will open a blank window. Try typing to see if text shows up on the Arduino. To exit, press Ctrl-A and release, then press k to kill the screen session, then press y to confirm. Screen sends Carriage Return (CR;\r) instead of Line Feed (LF; \n aka newline). There's no way to change this, but if you install picocom it will play nicely with newlines:

How mirror terminal output on the Arduino TTY

You can the output from a command to the Arduino TTY by redirecting standard output:

We can also use tee to echo the output back to the curent terminal. The echoed output will appear on the main computer immediately, but the command will wait until serial data is finished drawing on the Arduino before exiting.

Some commands behave differently when piped through tee, however. The command unbuffer (apt install expect) can trick them into behaving normally:

You can list the settings of a tty device using stty:

stty can set the number rows and columns on a tty, but this won't work:

What does work is setting the rows and columns on the current virtual terminal in linux. Note that this size will be reset by any window resize events:

Note how the output of ls is correctly wrapped after applying this command:

You can pipe all output from the shell to the screen by starting a new instance of bash and using tee to send a copy of stdout to the Arduino:

If bytes arrive faster than the Arduino can react, the serial buffer will overflow. This leads to dropped bytes. To address this, one can

At the moment, the only guaranteed solution is (1) or (3). Increasing the buffer size (2) can help with transient loads, but still requires the host application to carefully limit its overall data-rate. Software control flow appears to not work on Linux with USB serial, although there may be hacks that work for specific hardware. The additional delays added by (5) are generally too small to make a difference.

Ostensibly, it should be possible to request that the kernel use software control flow. In this mode, the Arduino should be able to send the byte XOFF (19) to pause transmission, and XON (17) to resume it. It is enabled by the flag ixon in stty:

HOWEVER, it seems like the XON/XOFF software flow control does not work. Google suggests that this is a common, hard-to-fix, issue [1,2,3,4,5]. "The short version is that there is no such thing as "flow control" in any USB-serial adapter based on USB-serial."

These modes relate to flags in the c_oflag register of the termio struct in linux (more documentation here).

To add the maximum delay after positioning commands, run

The Adafruit drivers aren't optimized for speed. We stripped them down to the bare essentials needed to get text onto the screen. Here are a few suggestions, if you're writing your own:

Notes specific to the ILI9341 shield on the Uno 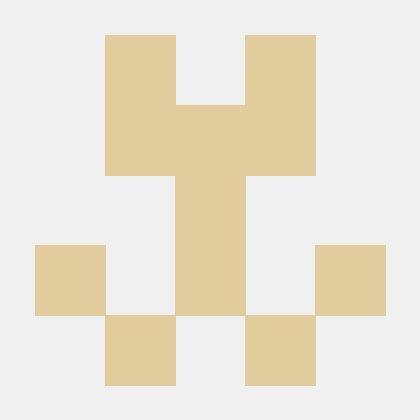 N64 - Arduino Uno - Nintendo Switch Description By connecting an original N64 controller to an Arduino UNO R3 running this code, and plugging the US 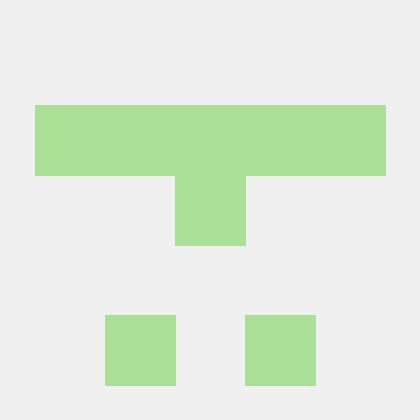 The ultimate battery tester with ESR measurement and discharge graph. Based on an Arduino Nano and a 1602 LCD.

Ultimate-Battery-Tester Version 1.0.0 Features Measures the ESR (equivalent series resistance) of the battery. This is an idicator of the health of th STM32 Tiny Monitor A super tiny monitor for your PC, suitable for your pet ant. A python script sends the captured screen over USB to the STM32 microc gbaHD AIO Shield This is a Spartan Edge Accelerator shield which implements all the hardware connections needed for zwenergy's gbaHD, no wires require 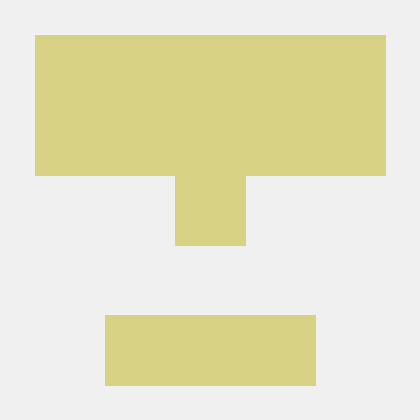 A simple tool using PC mouse via USART to control MCU and LCD/OLED (with LVGL library), if your screen cannot be controlled by touch.

LVGL_USB_Mouse A simple tool using PC mouse via USART to control MCU and LCD/OLED (with LVGL library), if your screen cannot be controlled by touch. 如

The function is based on MQTT. When the original serial of ESP8266/ESP32 cannot be used, it can replace serial print.

MqttPrint and MqttMonitor The function is based on MQTT. When the original serial of ESP8266/ESP32 cannot be used, it can replace serial print. MqttPr 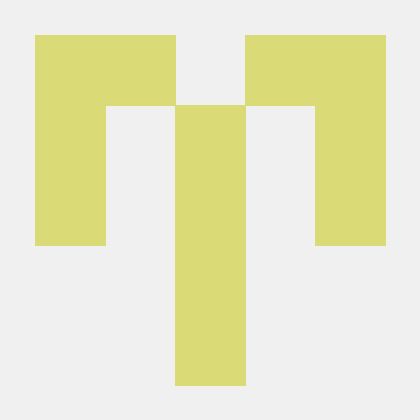 Introduction Green-Shield is an Arduino R3 shield for temperature, humidity, soil moisture and ambient light optimized for use in greenhouses where th

Library of useful C++ snippets and reusable classes I've created as I build out Arduino Uno and ESP32 projects.